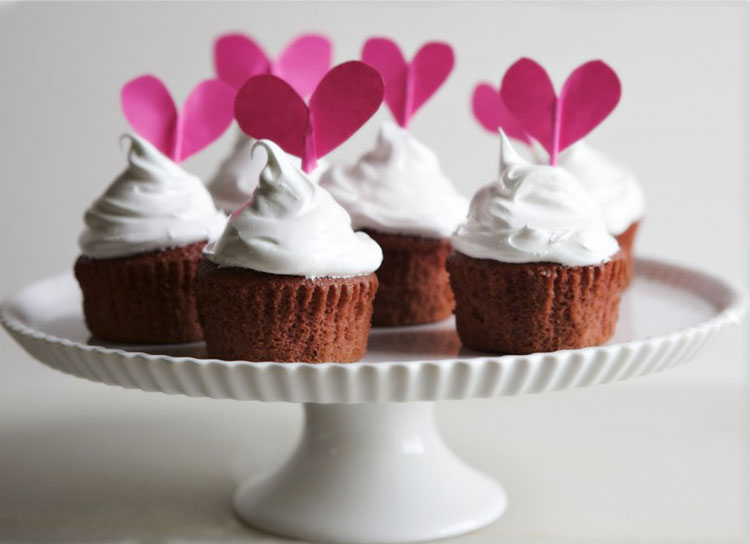 We make these every Valentine’s Day for all our sweethearts. The meringue frosting—light, silky-smooth, and sweet—beats all the others we’ve tried, hands down.

For the cupcakes, preheat the oven to 350°. Line muffin pans with paper with 24–28 cupcake liners and set aside. Beat the butter and sugar together in a large mixing bowl with a mixer on medium-high speed until pale yellow and very fluffy, about 5 minutes. Beat in the eggs one at a time, beating well after each addition. Add the food coloring, cocoa, and vanilla, and beat on medium speed until well combined.

Combine the flour and salt in a bowl. Add the flour and buttermilk to the butter-egg mixture alternately in thirds, beating after each addition until just combined. Mix the vinegar and bak-ing soda together, then add to the batter. Beat until the batter is smooth and well combined.

Divide the batter between the cupcake liners, filling them about three-quarters full. Bake until a skewer inserted into the center of the cupcakes comes out clean, about 20 minutes. Tip the cupcakes out of the pans, transfer them to a wire rack, and let cool completely.

For the meringue frosting, put the sugar and ½ cup cold water into a medium saucepan. Heat over medium heat, gently swirling the pan to help dissolve the sugar. When the syrup comes to a boil, cover the pan to let the steam run down the sides, washing away and dissolving any sugar granules clinging to the sides. Boil until the sugar is completely dissolved and the syrup is clear. Uncover, and continue boiling until the temperature registers 238° on a candy thermometer.

Meanwhile, put the egg whites, salt, and cream of tartar in a large mixing bowl. Beat with a mixer on medium speed until soft peaks form, about 2 minutes. Increase the speed to high and gradually pour in the hot syrup. Continue to beat until the whites are stiff, glossy, and have cooled to room temperature, about 15 minutes. Ice the cupcakes with the meringue frosting. (There may be frosting left over; unfortunately it doesn’t keep.)